MoSaiQC consists of ten academia and industry partners of the European Quantum Flagship consortium iqClock and three further partners to provide a unique training experience for the ESRs. The iqClock consortium is developing an integrated optical clock and a new type of optical atomic clock, superradiant clocks. The ESR projects will take place in the laboratories and research centers of iqClock and the ESRs will develop Modular Systems for advanced integrated Quantum Clocks (MoSaiQC), such as advanced atomic sources, lightweight integrated atomics chambers, high-finesse cavities, flexible laser systems, resilient frequency stabilisation systems, modeling tools, and more. These systems go beyond what is currently developed in iqClock, but will immediate be used to advance the iqClock project. The ESRs are working within the iqClock teams, giving them hands-on experience not only with the specific systems they develop, but with entire optical clocks. Half-year secondments and visits of ESRs to other partners will broaden the horizon of the ESRs and give them exposure to the application of optical clocks.
Optical clocks are the most stable clocks ever built, reaching an accuracy at the 10-18 level, which corresponds to being off by only 1 second over the age of the universe. The basis of this amazing stability is the frequency reference used in these clocks: atomic transitions in the optical frequency domain (1014 Hz) with mHz linewidth. Optical clocks far outperform standard microwave clocks, which use a microwave transition (1010 Hz) as reference and reach an accuracy of only 10-16. So far optical clocks are large and fragile research instruments, typically filling a room and needing several scientist to operate. To fully exploit their possibilities, it is essential to make optical atomic clocks as integrated, robust, compact and easy to use as the best commercial clocks, which are microwave clocks. The research undertaken by MoSaiQC will propel us towards this goal and also benefit other quantum technologies, such as atom interferometers. Success will have a huge impact: telecommunication companies are eager to obtain affordable, robust optical clocks, since those devices would improve their services (increased bandwidth by better network synchronization), make them more reliable (upholding network synchronization in case of GPS outage), and enable them to offer new services (10-cm accuracy navigation through 5G networks instead of GPS, which would be highly beneficial for autonomous vehicles). Space agencies are keen to operate optical clocks on satellites, where they could form the basis of gravitational wave detectors, perform tests of general relativity, or improve navigation systems. Further applications are found in geology (e.g. underground exploration, monitoring of water tables or ice sheets), astronomy (e.g. radio telescope synchronization), and fundamental physics (e.g. search for dark matter or changes of fundamental constants).

How do optical clocks work?

Optical atomic clocks are the most precise scientific instruments available to humanity. Their accuracy and stability reach eighteen significant digits. A standard optical atomic clock consists of two state-of-the-art components: an ultra-stable high-Q optical cavity which transfers stability of the length into stability of the frequency, and an atomic sample which transfers accuracy of the energy of the ultra-precise atomic clock transition into accuracy of the frequency. These two frequencies are compared with the help of a frequency shifter (FS) and a feedback is added to the laser frequency. 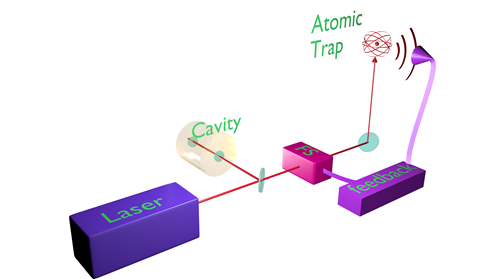 In an optical lattice atomic clock, atoms are tightly confined in a Lamb-Dicke regime in an optical lattice formed by a standing wave inside an optical cavity. The Lamb-Dicke regime effectively suppresses all motion effects, preventing any Doppler shifts of the measured transition. The lattice is operated at the so-called magic wavelength at which the light shifts of ground and excited energy levels compensate each other with high accuracy.
The cavity instability, which is transferred to the probe laser as a phase noise, is the limiting factor for the interaction time between atoms and the laser. Even with the best state-of-the-art optical cavities the stability of the whole optical atomic clock is limited by the Dick effect, the down-conversion of cavity frequency noise because of the need to periodically prepare a new sample of atoms. Furthermore the need for an ultra-stable reference cavity is a complication for a commercial optical lattice clock. Superradiant clocks can help to overcome both difficulties. 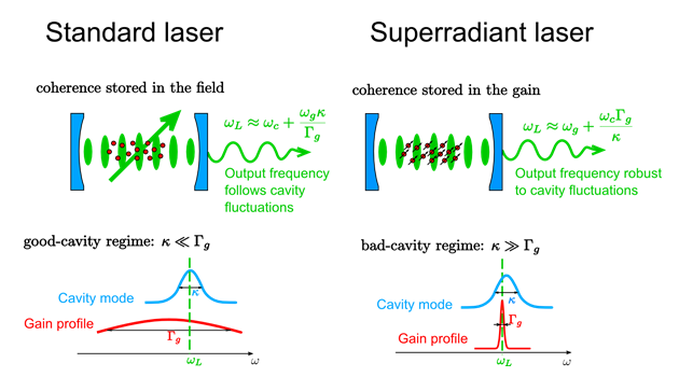 This robustness of the radiation frequency with respect to the cavity ﬂuctuations promotes the idea of a high-performance active optical frequency standard using an atomic clock transition as a gain medium. Above the lasing threshold the atomic ensemble itself produces a highly stable oscillation which is also locked to the atomic line. The very same basic principle is already successfully exploited in hydrogen masers, forming the most successful microwave active frequency references as used in the Galileo satellites.